Opportunity Mexico: How to Export, Import & Invest in Mexico was a breakfast event held by the Latin American Trade Council of Ireland (LATC), of which LatinAmerica.ie is a founding member. 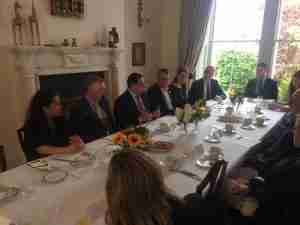 LATC was proud to host this event, which included:

The aim of this event was to show Irish companies how to achieve success in Mexico and to give an idea of Ireland’s trade and investment activities in this fast-paced country of over 130 million inhabitants, which is now Ireland’s leading trading partner in Latin America.

This was an exclusive, by-invitation-only event, which had limited spaces available. Its format was a mediated round table discussion among professional peers, that openly highlighted challenges, opportunities, and best practices.

His Excellency, Ambassador Miguel Malfavon opened the event, followed by a short presentation by Patrick Daly, Managing Director of Alba Consulting, who mediated the proceedings. Patrick’s presentation was followed by contributions from some of Ireland’s most successful CEOs who conduct business with Mexico and the mediated open round table discussion involving all attendees.

Since 2009, Ireland Mexico Exports and Imports have grown by four times. The EU and Mexico have also recently announced a free trade deal which will remove almost all tariffs on trade between Ireland and Mexico.